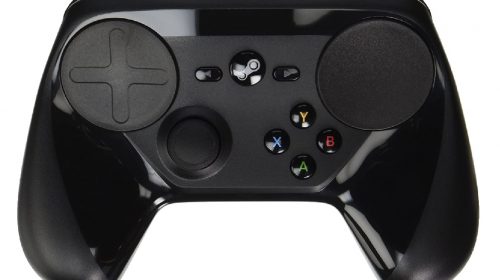 Right off the top: This is probably going to be a frustrating review to read. The reason is that I’m going to review the somewhat recently discontinued Steam Controller by Valve. So, yeah…reviewing something that is hard to buy now is one thing. But the other frustrating thing is that the Steam Controller is amazing. In fact, for me, it’s actually so good that it’s an indispensable part of my gaming set up. There are some games that I simply won’t play without it.

Like so many people, I spend a ton of time on computers. I largely spend my work day using a mouse and keyboard. I also run two websites, which of course means more mouse and keyboard time. To me, using a mouse and keyboard feels like work, not relaxation. I also just happen to love video games, and unfortunately some of the games I enjoy don’t offer standard Xbox/PS controller support. Enter the Steam Controller. The track pad on the right side, in conjunction with the trigger buttons, perfectly emulates using a mouse. And keyboard keys can be bound to the face buttons (X, Y, A, B), including combinations like holding a trigger, double taps, or long presses. With these modifiers, you can get a surprising number of key binds set up.

This controller has been a complete game-changer (Dad joke mode activated) for me. I never would have even tried some of my favorite games of all time, like Kenshi and Pillars of Eternity, without the Steam Controller. Even MMOs like World of Warcraft are more comfortably played (although probably just at a casual level). When Valve discontinued it in December 2019, I bought a few new units to keep as backups. My current controller works fine, but I knew how important it was to my gaming situation.

There have been rumors, filed patents, and other news about possible future controllers from Valve. Hopefully, in the future, there will be a refreshed version of the Steam Controller. It’s still available from some third-party sellers on Amazon, but not for anything near its original retail price of $49.99.

As I mentioned, I haven’t been able to find the Steam Controller available anywhere for less than $100. But at least some vendors are still selling it for now.

A different kind of gamepad

We’ve improved upon the resolution and fidelity of input that’s possible with traditional gamepads. Built with high-precision input technologies and focused on low-latency, wireless performance, the Steam controller enables you to experience your games in powerful new ways.

The Steam Controller‘s dual trackpads enable the high-fidelity input required for precise PC gaming in the living room. Allowing for 1:1 absolute position input via virtual controls like a trackball, adaptive centering joystick, or steering wheel, these surfaces can be programmed to serve up whatever a game needs.

Haptic force actuators on both sides of the controller deliver precise, high fidelity vibrations measured in microseconds. Feel the spin of a virtual trackball, the click of a scroll wheel, or the shot of a rifle. Every input, from the triggers to the trackpads, can offer haptic feedback to your fingertips, delivering vital, high-bandwidth, tactile feedback about speed, boundaries, thresholds, textures, or actions.

With a satisfying digital click at the end of the trigger pull, dual-stage triggers can be used as analog, digital, or both types of input at the same time. Put your iron-sights on the sweep-in, and then fire with the reliable feel of a tactile switch, all on the same trigger.

Each of the Steam Controller’s input zones and buttons has been positioned based on frequency of use, required precision, and ergonomic comfort.