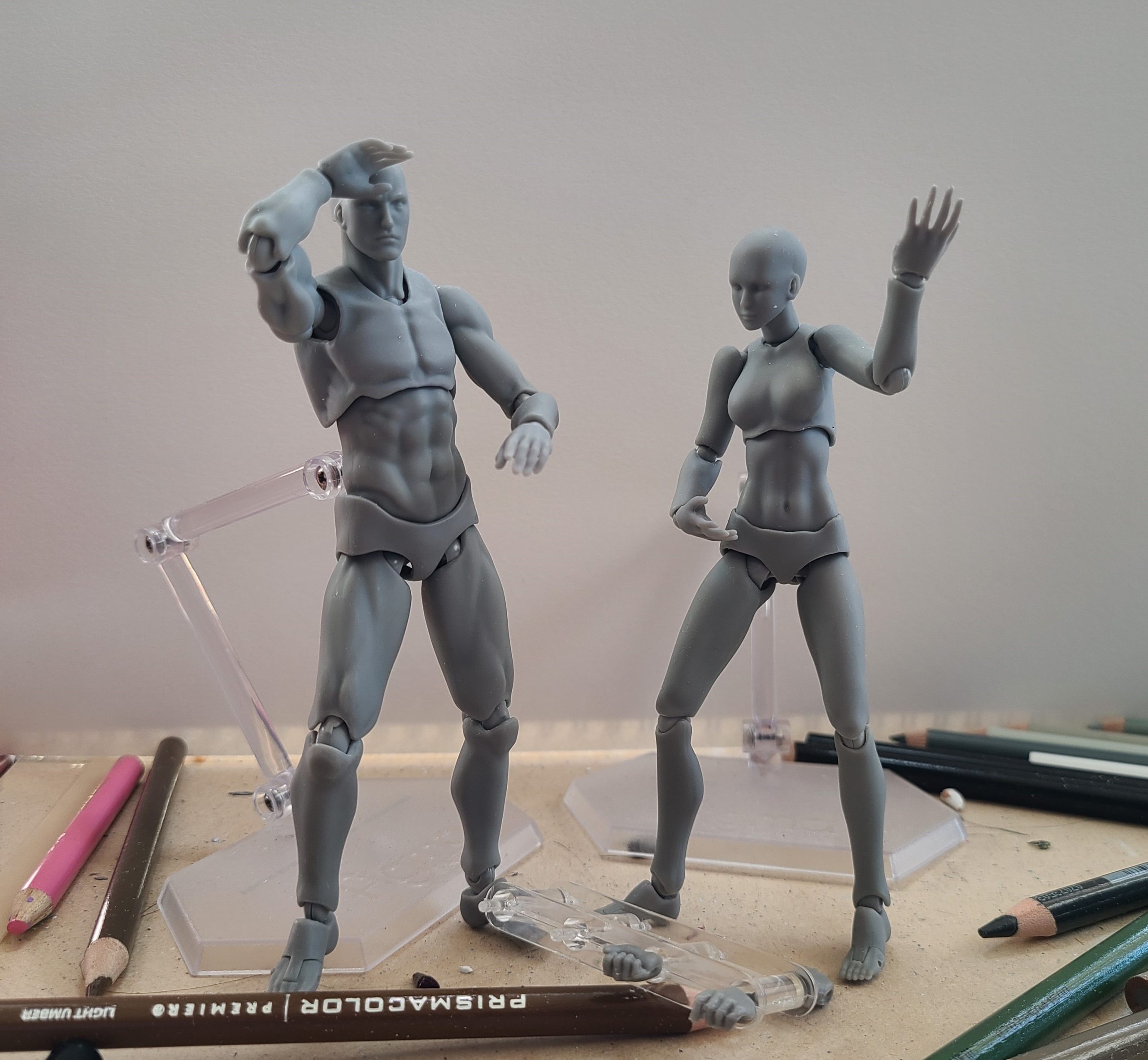 This review is primarily about authentic Figma Archetype Next branded models…but I will also talk a bit about the extremely widespread bootleg versions that are readily found on sites like Ebay and Amazon. The real, Figma-branded drawing models in the Archetype Next line are quite excellent. Available in either the “He” or “She” varieties, they come in either gray, peach, or bright orange. These figures are manufactured by a company in Japan called Max Factory and typically carry a number (01, 02, 03, or 04) designating how recent the release/version is. This Archetype Next figure is great as a drawing model, but it seems like they’re also used by collectible hobbyists to design characters. They’re made of PVC plastic and have extensive points of articulation, allowing for a wide variety of poses when drawing. Although the musculature is exaggerated, the proportions are pretty reasonable. I’ve found the authentic models to be well-made and durable enough to my use (not sure how they’d stand up to my kids playing with them though). Each model came with an transparent, adjustable stand that can be used to hold them in various upright poses. I haven’t used them a ton, since many of my drawings are just head-and-shoulders portraits. But when I’ve needed a full body example, these have been useful to reference.

There are two major downsides to these Figma models and they’re two sides of the same coin. First, it’s hard to find Figma Archetype Next models from authentic sources. Figma doesn’t appear to sell them on their own site, and since it’s primarily an item sold in Japan, it seems the safest path might be through an import site or shop that sells Japanese things. The second downside is that listings you can actually find online are quite often knock-offs. For example, there are many listings on Amazon…but are any actually authentic Figma/Max Factory-made items? I have linked both “He” and “She” models that seem like they may be, but it’s sometimes hard to tell what you’re going to get in cases like these. It’s a similar issue on Ebay. The first models I purchased were definitely knock-offs; they weren’t shipped in a legitimate Figma box, and the models themselves fell apart pretty quickly. Additionally, the bootleg figures had somewhat bizarre proportions. They weren’t wildly out of proportion…but just enough to feel off (head to body ratio, neck thickness, etc).

Eventually, I found a seller on Ebay that appeared to be just a regular person who had the original boxes. I think if you can find someone who took their own photos, rather than the “professional” type seller who uses commonly recycled images, that is a good indicator. I’ve embedded a photo with some additional descriptions to explain what I mean. It really is difficult to determine until you actually place an order and see what you get – my advice is to make the most informed guess possible and use a site with good buyer protection/return policies. Having owned both bootleg and authentic versions of Figma Archetype Next drawing models, I can say there is a vast difference between the two. The quality of product is not even in the same ballpark, so it shouldn’t be hard to determine if you have an authentic one.

In general, I think for Figma Archetype Next figures, the old adage is true – you get what you pay for.

Availability Notes: Watch out for counterfeits! They’re widespread on many sites. It seems Max Factory may have a presence to some extent on Amazon and Ebay, so those may be slightly more expensive paths. I have had mixed results bidding for used figures on Ebay. There are some other options too, like import stores, but I have no experience with them.

Description from listing for the 03 model: The next generation figma model.

A new version of the foundation of all female figmas (the archetype:she), and the male figmas (the archetype:he), are back with more realistic proportions in in a gray, peach, and orange color great for designers. The figma can easily be used as a model for illustrations or manga, and can also be used as the base for your own customized action figure.

One Thought to “Figma Archetype Next Figure”